Tocotrienols: Beyond Vitamin E ~ Amazing Health Benefits for You

Tocotrienols: Beyond Vitamin E
~ Amazing Health Benefits for You ~

Vitamin E (alpha-tocopherol) is a well-known substance and has been studied for decades. Its benefits include profound antioxidant activity with a particular affinity for inhibiting lipid peroxidation of tissues. Lipid peroxidation is a major factor in cardiovascular disease and other conditions. In nature vitamin E is found as eight distinct components: four tocopherols and four tocotrienols. For over fifty years the “active’”component of vitamin E was considered to be d-alpha tocopherol because it was found to cure gross deficiency symptoms in rats and was therefore considered the only necessary component. Low blood levels of tocopherols are associated with higher rates of cardiovascular disease and cancer. Tocotrienols are the forgotten half of vitamin E, and in nature are distributed as widely as tocopherols. In this newsletter we will delve into these compounds and their impressive effects.

In some foods, such as wheat germ and corn, tocopherols predominate. In some others, tocotrienols predominate. The highest sources here are rice bran and red palm oils. Chemically, tocotrienols are similar to tocopherols, except for a unique “isoprene” tail. Due to this structural difference, tocotrienols exert biochemical effects tocopherols cannot. Tocotrienols appear to be powerful antioxidants, possibly stronger than vitamin E. However, in addition to their antioxidant activity they have been extensively studied in the areas of cardiovascular disease and cancer prevention.

Tocotrienols have been shown to surpass vitamin E in antioxidant activity by multiple mechanisms. They have a greater efficiency at recycling after absorbing and disarming a free radical, they have a more uniform distribution within the cell membrane, and have a greater ability to break into and move through membrane lipids which makes interaction with free radicals more efficient. These activities can also result in enhanced protection of lipid-carrying molecules traveling in the blood, such as LDL and HDL. Tocotrienols assist in protecting the lipid fractions of the blood which, in turn, helps to prevent the progression of atherosclerosis.

Both animal and human studies have shown that tocotrienols have positive effects on serum lipids in subjects with high cholesterol. They decrease the liver’s capacity to manufacture cholesterol by inhibiting a key enzyme. In one double blind, crossover study, serum concentrations of total cholesterol and thromboxane (a potent inducer of platelet aggregation and vasoconstriction) decreased significantly in only those subjects given a natural, palm derived tocotrienol mix. Amazingly, some of the participants had lowered their cholesterol by 31% in only 4 weeks when given 200 mg gamma tocotrienol. The drop was in the more dangerous LDL and VLDL cholesterol fractions while the “good” HDL was left unchanged. It was also noted that tocotrienols may protect against atherosclerosis since tissue injury from free radicals is the final pathway of damage in the diseased artery. As well, tocotrienols were shown to cause a decrease in thromboxane levels in humans by 20-26% and a decrease in platelet aggregation (blood cell stickiness — a risk factor for disease).

Palm Fruit Oil is a Good Source of Tocotrienols

Tocotrienols are classified as isoprenoids due to their isoprene chain, mentioned above. A number of isoprenoids have been tested for their anti-cancer activity. That the effects of individual isoprenoids are additive suggests that the anti-carcinogenic nature of plant-based diets is due at least in part to the tumor growth-suppressive action of diverse isoprenoid constituents of fruits, vegetables, and cereal plants. A tocotrienol blend was found to have the strongest anti-carcinogenic effect on a virulent melanoma strain. When fed a tocotrienol-rich palm oil diet, a group of rats exposed to potent carcinogens had significantly less tumors than those not fed the palm oil. The cancers here were mammary and liver. It was summarized that tocotrienols possess a marked tumor suppressive and chemopreventive effect. The term chemopreventive applied to a substance means that it must demonstrate significant ability to prevent the formation of a malignant tumor and to suppress or halt or reverse tumor growth once it has begun. Tocotrienols have been used in conjunction with the breast cancer anti-estrogen drug Tamoxifen. Results showed that they are successful inhibitors of both estrogen receptor positive and negative cell lines. 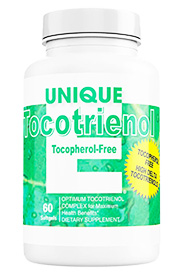 Evergreen Nutrition carries several vitamin E products containing a small percentage of tocotrienols, and one stand-alone tocotrienol product. Unique E Tocotrienol from A.C. Grace Company is a high-potency product supplying 125 mg of a full spectrum tocotrienol complex. The company recommends taking this product away from a vitamin E supplement as tocopherols have been shown to inhibit tocotrienol absorption. It is also recommended to take with an evening meal for superior absorption. This product is free from gluten, soy, and GMOs.