Traditionally reishi was used by Taoist monks to improve meditation, promote calmness and attain a long and healthy life. It was also known as the “emperor’s mushroom” and was sought by ancient Chinese royalty for their use exclusively. Throughout Chinese and Japanese culture reishi has become immortalized and represented in paintings, statues and tapestries. The most famous of all Chinese materia medica herbal texts, written between 206 BC-AD 8, lists reishi mushroom as the most respected of the 120 superior tonics. Superior tonics were considered to prolong life, prevent aging, boost qi (vital force) and make the body light and limber.

Reishi belongs to the polypore family of mushrooms, containing pores under their caps instead of gills, that grow on the trunks or stumps of trees. Its Latin name, Ganoderma lucidum, translates to “shiny skin” due to the varnished appearance of the conk’s surface. (A conk is a shelf or bracket fungi.) Reishi mushroom is one of the most widely researched of all Asian botanicals. Modern pharmacological studies have identified polysaccharide and triterpene fractions mainly, with amino acids, vitamins and minerals present as well.

The main therapeutic activity reported on reishi is centered around these properties:

Reishi has been shown to possess numerous cardio-protective activities. It inhibits platelet aggregation, reducing “blood cell stickiness” and thus improving thrombi conditions (blood clots). It has significant blood-pressure lowering effects through its action on angiotension-converting enzyme (ACE). Compounds in reishi have been shown to inhibit cholesterol synthesis and absorption as well as reduce triglycerides. In a study of patients with heart disease, a cold-water infusion of reishi was administered to 35 patients. Symptoms (undefined), electrocardiogram (ECG) and primary blood dynamic parameters reportedly improved in 86% of patients. Reishi benefits angina and has been described in ancient Chinese texts as being able to treat “binding in the chest.” Its classic property here is to “nourish the heart.”

Reishi supports immune function through multiple mechanisms. Its polysaccharide beta-glucans contained in cell walls support both innate and adaptive immunity. The body’s first line of defense, innate immunity, is comprised of cells that detect and attack pathogens. Innate immune cells include macrophages and NK cells. Adaptive immunity is a later response to a specific threat such as a particular bacteria or virus. These cell types include B-cells and T-cells. Reishi’s beta-glucans have the ability to activate and stimulate both as well as modulate immune response on the whole. Reishi has been shown to inhibit leukopenia, the decrease in white blood cells that is a side-effect of chemotherapy drugs and, as such, is often used as an adjunct to chemotherapy and radiation therapies. A 1992 study reported that reishi significantly inhibited the growth of leukemia cells. It has been shown to have antiviral properties as well. Generally this mushroom should be used as a tonic, taken on a regular basis to support/protect daily immune health.

Reishi contains novel triterpene compounds, ganoderic acids, which have many biological effects. One compound is an inhibitor of an enzyme closely related to liver dysfunction. Two Chinese clinical studies showed promise in treating chronic hepatitis as well as cirrhosis. Many studies have focused on reishi’s ability to protect the liver from chemical damage and enhance its detoxifying activity. Treatment with reishi protected against carbon tetrachloride-induced hepatic damage and indomethacin-induced mouse deaths. Liver cell regeneration was also noted. Part of the hepatoprotective effects are also attributed to the profound antioxidant activity of reishi. It has been shown to scavenge superoxide and hydroxyl free radicals. Triterpenes present have been shown to cause a reduction in liver enzymes. One study comparing the hepatoprotective effects of various plants showed the polysaccharide isolated from reishi was the most effective of the plants studied for raising levels of glutathione in liver cells.

Reishi has shown pronounced antihistamine action. It is anti-inflammatory. It has been used in Asia to benefit the lungs, helping in conditions such as bronchitis. It assists respiration and is used to assuage high-altitude sickness. Reishi’s beta-glucans benefit the skin and it has been used in Asian skincare for decades to beautify the complexion. It improves energy as well as sleep and in Asia is well-known as an aid for insomnia. Its overall effects may be described as a true adaptogen, restoring homeostasis. 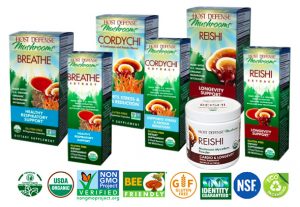 Evergreen carries many reishi products, either singly, combined with other mushrooms or in immune formulas. From revered mushroom company Host Defense comes their Reishi vegan capsule, available in three sizes, as well as a popular and economical powder of this legendary mushroom — perfect for adding to smoothies. CordyChi and Breathe feature reishi combined with fellow formidable fungi cordyceps and/or chaga. These benefit energy and respiratory health as well as immune function. Host Defense also offers MycoBotanicals teas which feature reishi in each blend: Peaceful Mint, Turmeric Immune and Hibiscus & Green Tea. All Host Defense mushrooms are certified organic and grown at their farm in Washington state. 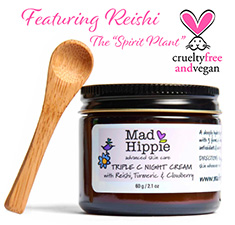 On the skincare front, Mad Hippie’s new Triple-C Night Cream, a must-have for staff member Beth, features extracts of reishi and chaga mushrooms for adaptogenic, antioxidant and other benefits.

Let reishi, an ancient ally, assist you in attaining radiant health and beauty.