Minerals are undeniably important in nutrition. The human body manufactures several vitamins, but minerals must be gained from the diet (or supplementation). Minerals are the foundation for good health, and many disease states are simply a deficiency—osteoporosis, cardiovascular disease, anemia. In this newsletter we will look at humic and fulvic minerals, along with the herb shilajit, a natural source of these compounds.

What Are Humic Minerals?

Humic soil is the source of a rich array of minerals. Ancient plant matter, long decayed and transmuted into mineral compounds, humic soil is also known as lignite. In addition to minerals, it contains amino acids, enzymes, phytochemicals, and organic acid compounds. This rich plant matter has many beneficial properties, including antioxidant, gut health, detoxification, and more.

Humic benefits the gut in multiple ways. It acts as a prebiotic to feed and strengthen good gut flora. It can support general detoxification and proper elimination (bowel regularity). It can seal gaps between intestinal cells, maintaining normal tight junctions and thus preventing and treating leaky gut. All of these support a healthy gut microbiome and therefore improved immune health, among other benefits. 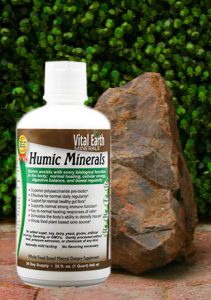 Evergreen carries products from mineral experts Vital Earth Minerals. Humic Minerals is described by the company as being for anyone who shows signs of a mineral deficiency and seeks to increase their mineral intake and anyone seeking a natural solution for daily bowel regularity and normal digestion. This product is gluten free and free of all common allergens. It is unsweetened and may be diluted in water. 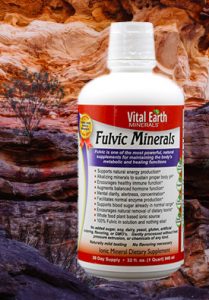 Fulvic is a compound within humic/lignite matter. It is isolated from the humic plant matter. This substance is a powerful antioxidant. It supports the body’s natural defenses, immune system, and energy. Fulvic can change, alter, or combine with both organic and inorganic matter to enhance the biological performance of cells. Fulvic is easily absorbed into cell membranes and is capable of transporting nutrients into cells with it. It is said to recharge the electrical potential of cells, thereby improving cellular function. It may support normal glucose metabolism and benefit overall metabolic health. Like humic, it is alkalizing, supporting a proper pH level. Fulvic also supports enzyme and hormone activity. It can support cognitive function and restful sleep.

Fulvic Minerals from Vital Earth Minerals is derived from fresh-water humate rich in a wide variety of trace minerals, and has an alkaline pH of between 7.8 and 9.0. The fulvic nutrients are in a very small, ionic form, making them easily absorbed by cells. This product is also gluten free and free of all common allergens. Trace Mineral Research has their Ionic Fulvic Acid, described by the company as helping to support and maintain digestion, pH balance, energy production, hydration, cellular integrity, enzyme activity, and muscle endurance and stamina. This product is non-GMO and gluten free.

This fascinating substance is legendary in the Ayurvedic pharmacopeia of India. It is revered as an anti-aging, health-giving herb of the highest degree. Not an actual herb (plant), shilajit is an exudate from mountain rock, a resinous, tarry substance composed of organic humic substances and plant and microbial metabolites. It is mainly sourced from the Himalayas in India, Nepal, and Tibet. Shilajit is extremely rich in fulvic acid and other organic acids and minerals and phytonutrients. It has been reported to contain adaptogenic, antioxidant, immunomodulatory, endocrine, and cognitive supporting properties. Its Sanskrit name may allude to the high regard in which it is held: “conqueror of mountains and destroyer of weakness.” 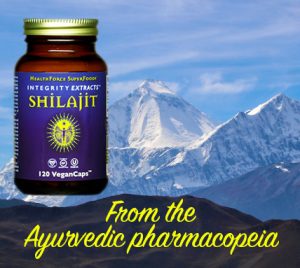 Shilajit has been shown to boost mitochondrial function, reducing aging at the cellular level. The fulvic acid content stimulates mitochondrial energy transfer and makes mitochondrial energy extraction more efficient, while humic substances speed the transfer of electrons along the electron transport chain, resulting in tremendous improvements in cellular energy and function. Fulvic acid has been shown to reduce the buildup of dangerous tau proteins in the brain, a major cause of Alzheimer’s disease. Shilajit was found to untangle filaments of tau proteins, thereby reversing the progression of that disease. Shilajit has also been shown to inhibit the breakdown of acetylcholine. Heart benefits include reductions in heart rate and blood pressure in studies, as well as respiratory rate.

India’s profound tonic is available from HealthForce. Integrity Extracts Shilajit is a vegan, gluten free capsule. It is described by the company as supporting healthy mitochondrial function and energy levels, cellular permeability for increased nutrient absorption, and detoxification and cleansing.